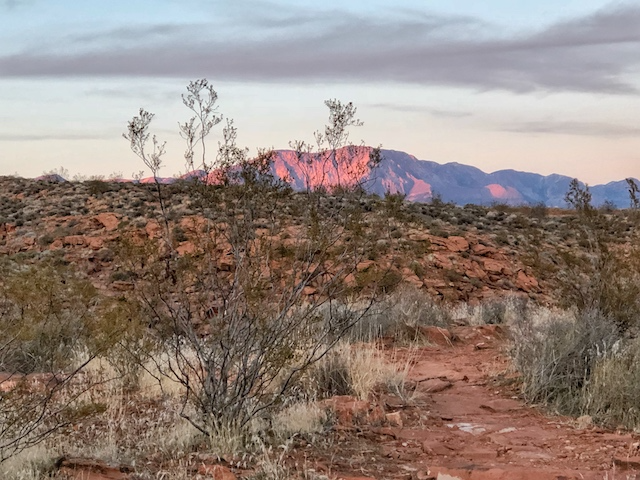 We pass this area several times a week driving from St. George to Washington City as we make our way over to the big box stores and I-15 freeway.  Each time we do, I've notice this trail head and wondered what lie beyond the end of the concrete pathway.

The locals fondly named the road this trailhead starts from "Turtle Road" because just off the road on either side is The Red Hills Desert Reserve which is a desert tortoise sanctuary.

If you look at the bottom portion of the fencing, it's woven tightly ensuring the endangered tortoise will stay out of harms way. Before the fencing, we'd frequently find a tortoise crossing the road and stop the car to move the little guy safely over to the brush.

Don't do that now as they are on the endangered species list and it's illegal to touch them!

Red Hills Parkway is the official name of this road and it's pretty scenic on its own having incredible views of Pine Valley Mountain and The Red Mountain. The parkway is also used as a portion of the bike leg of the race in the St. George Iron Man 70.3.

We decided Friday evening to hike that trail but getting a late start at 5 pm and it being winter, we knew we probably wouldn't be completing the whole three mile loop.

From the dirt parking lot, the trail led us through the tunnel and under the parkway. We turned left onto the paved Road Runner bike trail that runs adjacent to Red Hills Parkway and walked south towards Pioneer Park. We walked about 200 meters up the bike trail to a marked mountain bike trail called City Creek. There were mostly bike tracks on the trail and my husband said that it'd be a fun mountain biking trail but there were some pretty difficult areas that would be considered advanced for mountain biking.

On the way back to our car our dog spotted this dead coyote. It wasn't far from the road and the carcass was still in tact so most likely he'd been hit by a car and crawled off to the side of the road. It was interesting to my nature loving son to see all the bones in the skeleton and how they fit in the body.

When we got back to the parking lot it was nearly dark. I would've liked to have completed the whole hike but we'll complete it another day.

I'd suggest getting an earlier start especially in the hot summer months and preferably in the early morning as there is little shade available.